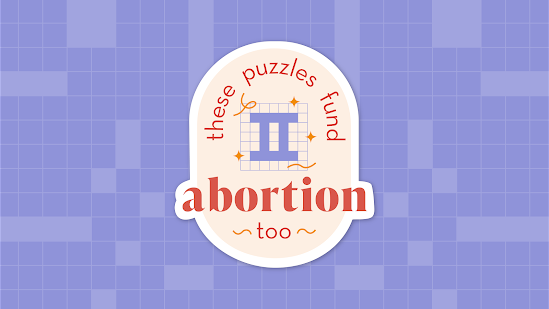 Popular posts from this blog

These Puzzles Fund Abortion Too — "Too Soon" by Brooke Husic

Healthline.com says the following about what to expect in week five and six of pregnancy: “You might have PMS-like symptoms such as fatigue, sore breasts, and morning sickness.” If I went five weeks without a period and experienced PMS symptoms, I would think it was … PMS. Pregnancy lasts about 40 weeks: six weeks is 15% of the way along. To understand how realistic it would be to attribute symptoms of possible pregnancy to actual pregnancy, you may solve the following crossword, in which only the first 15% of each clue is provided. The outcome of Roe v. Wade divided guidance on abortions into three categories for each of the three trimesters. In the first trimester, abortion may not be prohibited; in the second trimester, some so-called reasonable regulations may be taken; in the third trimester, abortions may be banned. The third trimester starts at week 27, which is 67.5% of the way to 40 weeks. Here is the same crossword puzzle with 67.5% of each clue provided. Abortion bans are
Read more

This puzzle is a sampler in the sense of an embroidery sampler and also in the sense of the ideal appetizer order for the indecisive. It's a set of smaller puzzles all crammed into one 15x15 grid, composed of four minis to whet your appetite before a more challenging meal in the middle. Whatever you do, please don't report me to @not_a_crossword . Bon appetit! -r puz pdf
Read more

These Puzzles Fund Abortion Too

Please visit https://fund.nnaf.org/AbortionPuzzles to learn more about "These Puzzles Fund Abortion Too"